Prototype of a digital twin for the Vallorbe train station

By January 2020, together with four teams of engineers and researchers, a digital twin prototype of the Vallorbe Station in open formats has been produced; it is made of IFC according to ISO 16739 (digital mockup), ISO 26300 (office suite i.e. spreadsheet…) and ISO 32000 (graphic and alphanumeric documentation). The twin enables digitalised real-estate management of the complex as well as supporting the physical transformation of the building through an architectural project. The design of the prototype will allow infinite transformations of the twin, independent from the CAD softwares with which it was conceived.

The twin is composed of two mockups built according to the BIM method: the architectural mockup based on LIDAR (point cloud) and an electrical appliance mockup [LOD 300]. They are linked to the SBB installation databank (DfA, Maximo) [LOI 500].

This work includes a manual describing how to update the databank from the digital mockup after the addition of new appliances and how to modify the .IFC mockups. This prototype extends the usual .IFC uses (see executive summary and glossary in French).

The Vallorbe train station complex is a monument of national importance on the Simplon-Orient-Express route built in 1913 by the architects Taillens & Dubois. The usable floor area of the three buildings (station, French and Swiss customs) is 8’000 m2, with a volume of 30’000 m3.

Currently the complexis used by traffic management (until 2024), a restaurant, for housingand the customs office (Switzerland). After 2024, the percentage of non- or under exploited space will be around 56% (customs buildings 90%).

Within the building’s life cycle, the current fictive project Vallorbe Station (Vokzaly) 2030 lies between the period of maintenance only and the preliminary transformation period, starting in 2030. 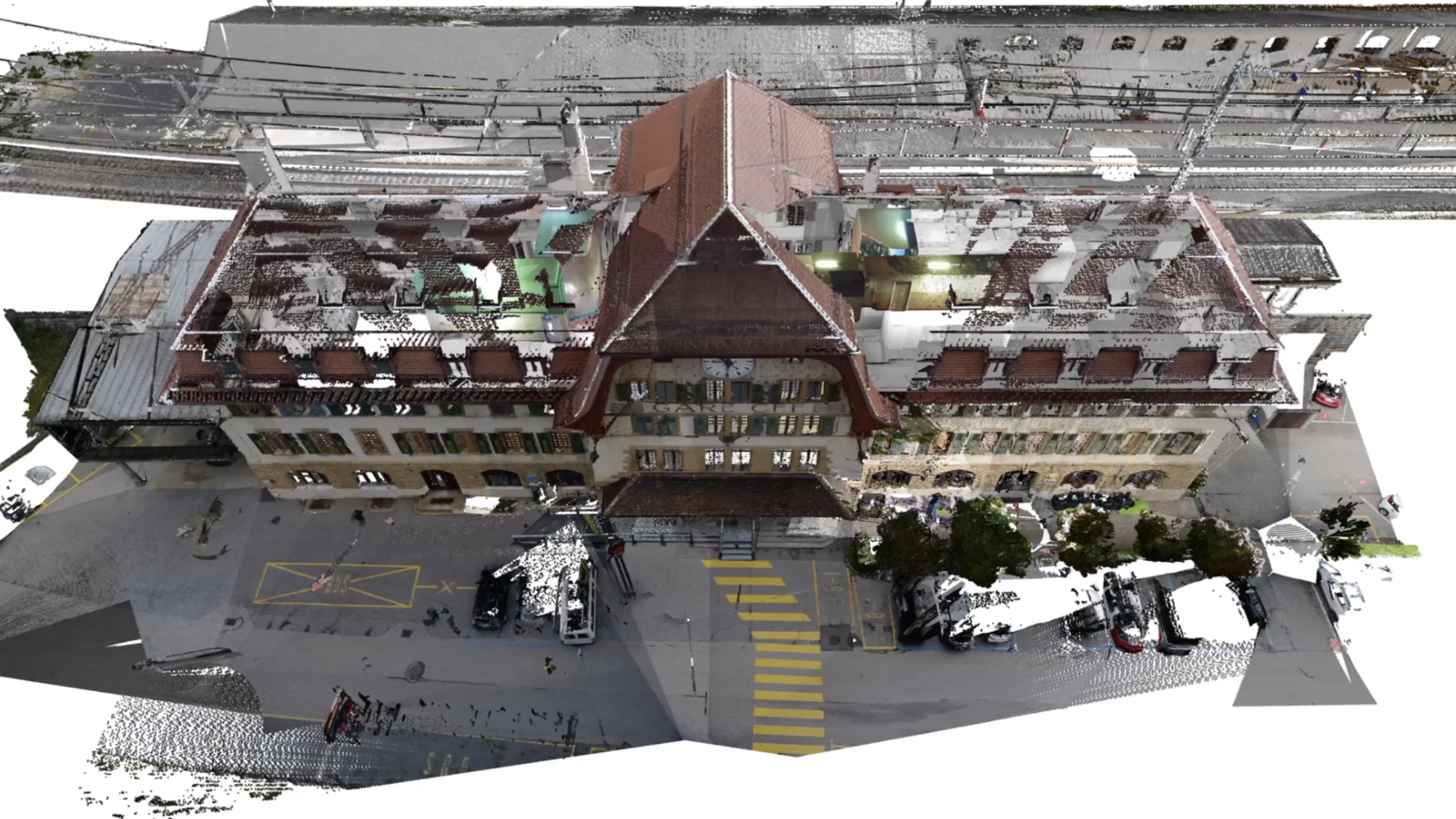 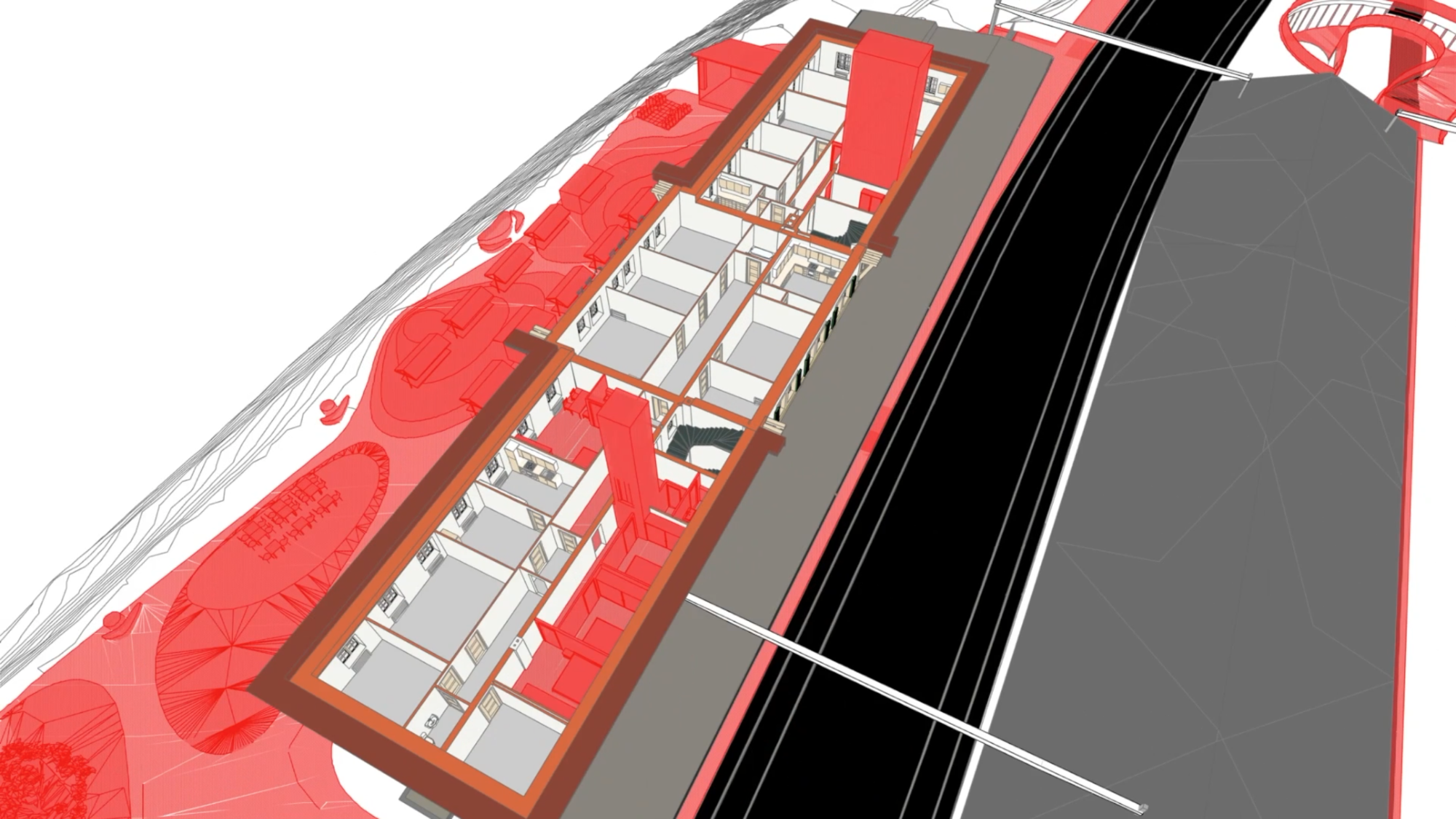 03 Digital mockup, simulation of transformation (in red). Here are visible, new guest rooms and access including from station square to platform for person with reduced mobility. Video still [s.14] 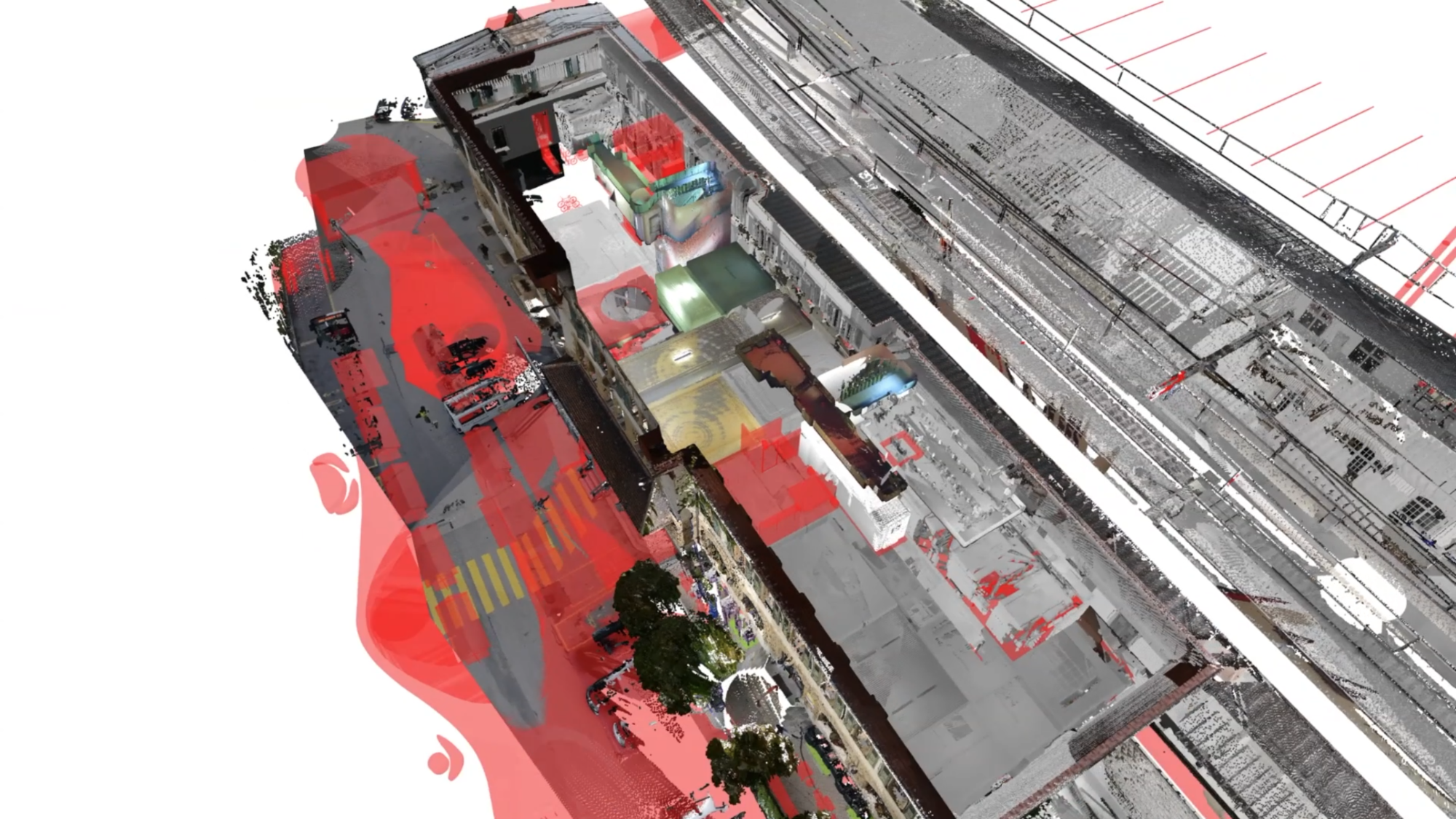 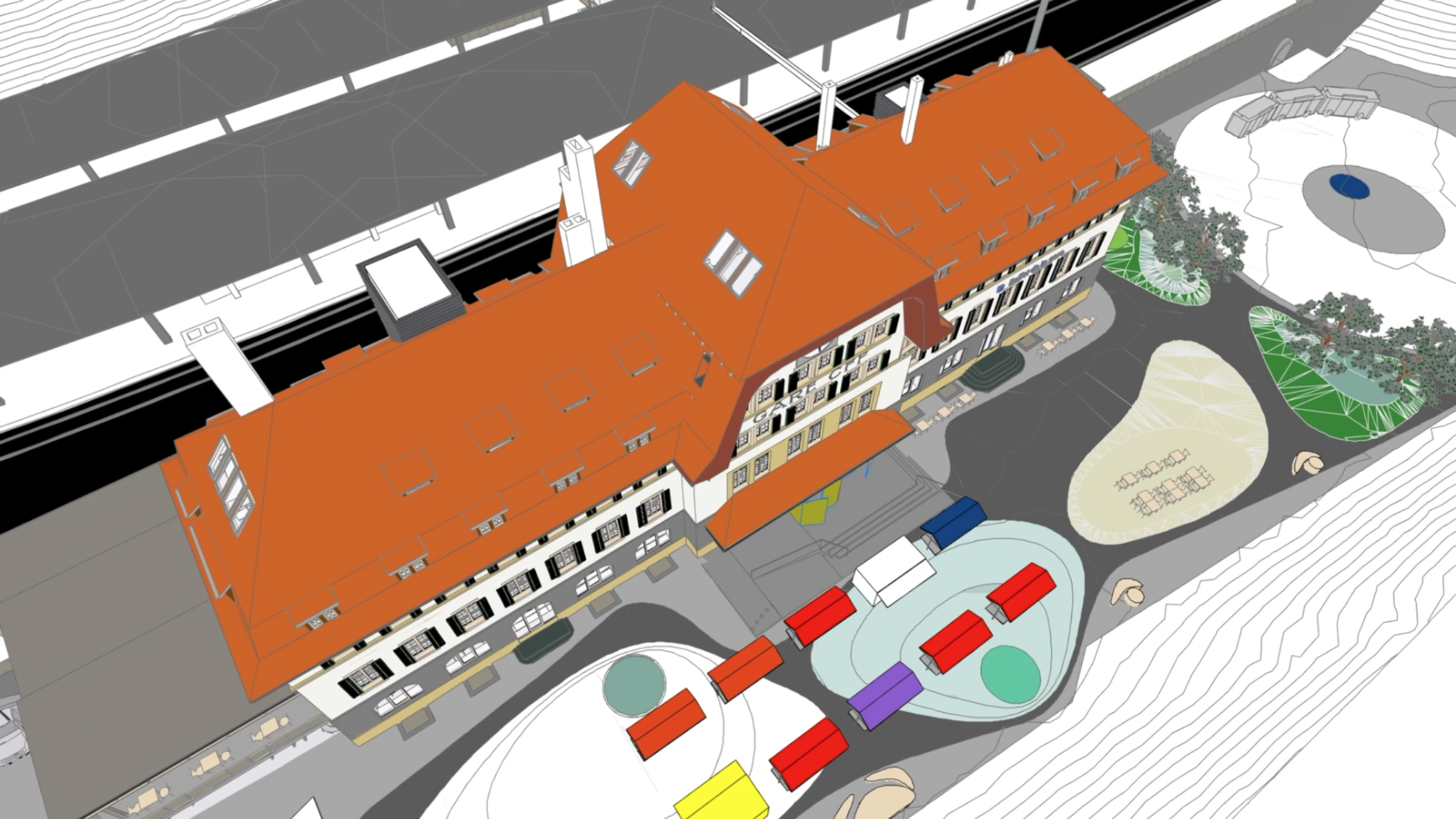 I. Reverse architecture with point cloud by surveyor (video above)

Phase one includes the production of a digital architectural mockup georeferenced in LV95 (Swiss reference system), containing the second level below ground which has never been documented, based on LIDAR documentation of the building (60% of the interior spaces have been scanned).

Information contained within the .IFC:

A situation mockup [LOD SIG 2] with the compilation of swisstopo (Federal Office of Topography) models: swissbuildings3D, swissALTI3D, is also produced during this phase.

II. Production of the digital twin (prototype) integration of the technical equipment and a link to the SBB databank

Phase two involves the engineers retrieving the architecture mockup in order to produce a mockup of the technical equipment. A web-based collaborative platform allowing the SBB to follow-up the development of the compiled interdisciplinary mockup in real time, is used.
Links are created between SBB .IFC objects and their current databank (DfA, Maximo).

III. Simulations of transformation including a method for multiple reuse of the IFC

In phase three a digital twin is designed, including a simulation of the building’s architectural transformation. A method for multiple use of .IFC is also included, however an evaluation of the advantages of both the parametric .IFC and the Boundary Representation (B-Rep) .IFC will be made in order to choose the most appropriate settings. A standard .IFC object catalogue for the SIA phases 11 to 33 (sketch design to building permit) is compiled using a selection of 40 of the 653 entities (“.IFC objects”) defined by buildingSMART and used to write the “Level of Information Need” (LOIN). In Switzerland by 2021, the LOIN will be used by the project owner forthe architect’s brief.
Plans of the transformed station are extracted from the mockup by algorithms (video below) and the procedure to reuse the IFC mockup in 20 years defined.

Simulations based on a fictive project. The Interdisciplinary simulations carried out on the digital mockups include:

Documentation extracted from digital mockup (Informations introduced in the .IFC displayed in BIMx below)

Video below: plans and sections are extracted by algorithms from the digital mockup. This insure a correlation between them.