In the architectural field of reclaiming industrial zones, a large number of urban and architectural designs have already been undertaken as well as realised. In most cases the design took over the existing by imposing a new (formal) order, a new programme or both. As a result, the historical evidence of the industrial precedents is erased, as if our contemporary society had to demonstrate a phantasmagorical evolution and the mastery of the previous era, the industrial.

The following work is an attempt to demonstrate that the architecture of industrial zone is by definition one constructed representation of our society and therefore could be reclaimed without many changes to respond to individual needs. They could be the models for the heterarchical society of the 21st century.
The research was divided in three phases that constitute the chapters of the present document. The first was a study of the impact of de-industrialisation on the constructed environment, the second a tool-making phase allowing the understanding of industrial zones and the third is a project undertaken on an exemplary site in Berlin with the design of micro-spaces for sole traders or start-ups called “Units”. 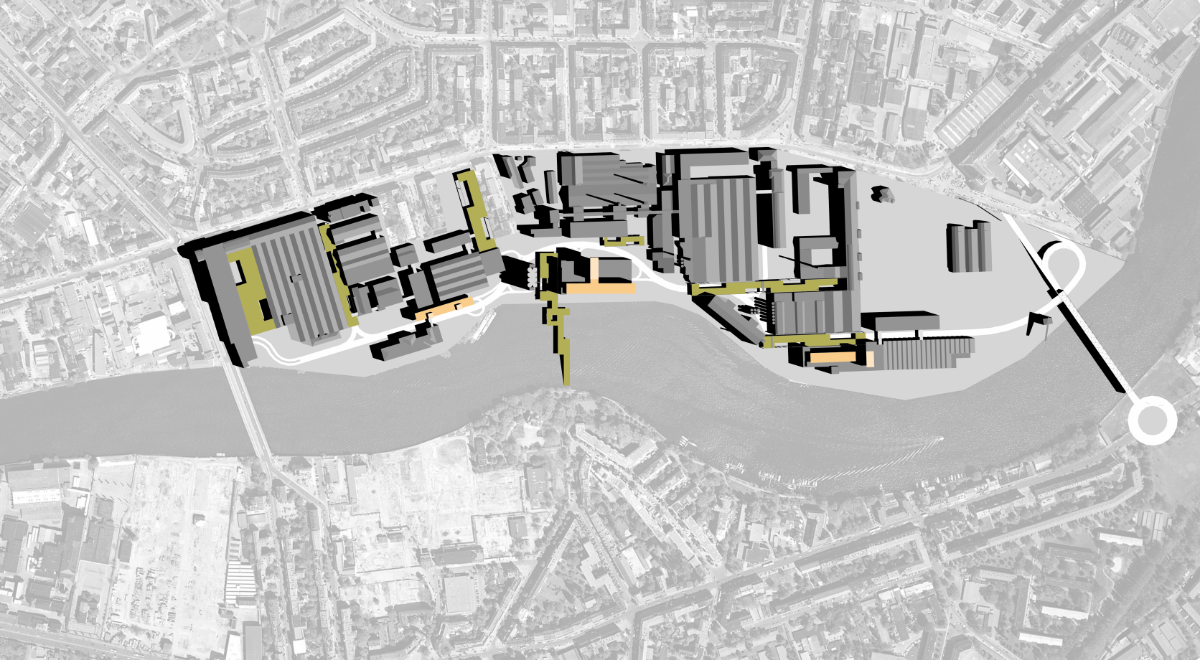 Above: Berlin-Schöneweide as example. 80ha of deindustrialized zone.

Left: experiment with the digital mockup of the project in LOD (SIG) 2

Since the 1960’s, European as well as North-American metropolises have been undergoing a process of urban restructuring related to a phenomenon called de-industrialisation. In Europe, the first of such urban design works started in the 70s’ with the transformation of docklands areas; for example in London, followed later on by Barcelona and Genoa. As part of the de-industrialisation, the relocation of production centres in low-cost labour countries such as in Asia and the South Pacific rim, made the bulk of the industrial infrastructure from the first half of the century redundant.

Even if the waterfront sites close to the city centre represent the privileged location for new urban redevelop- ment, they represent only a small proportion of the industrial zones.
This work concerns itself with constructed sites from the turn of the 20th century and built outside of the histori- cal city centre, which allowed them room to expand. These are the sites that grew up to 100 ha. or more in the high industrial era (around 1930) next to mixed urban developments, before getting “swallowed” by the urban sprawl. They are non-urban areas of pure production which the city’s infrastructures, such as public transport and roads, ignore. As the production ceased, these areas became large voids within the urban fabric and have a negative impact on their direct surroundings.

The idea to undertake this research in Australia was like solving a problem in physics: to extract a problem from its environment in order to observe it from outside. Australia is not considered as having been an industrial society, it has been able to observe the impact of industrialisation on the constructed environment by default or by comparison.

To work on this subject within a school of Architecture rather than in urban design or restoration is linked to the question of scale. Within a school of architecture the whole has to be treated as well as the detailed parts, furthermore this allows the reconsidering of a hypothetical brief. In most cases, this is where the mistake lies: to replace industry with a similar-sized entity such as commercial, educational, etc. and to forget the individual.

As these industrial sites provide a constructed environment reflecting the contemporary society’s need there is no need to remove any construction and therefore no demolition should be planned.

Because the environment is already constructed, the architectural tasks have to be (re)defined. There is an architecture but no programme, or to play with Sullivan’s words a form left without function. The work will have to be done in reverse: to define suitable programmes to replace the lost function and to abstract the industrial constructed forms in order to integrate new functions within them.

This research has been divided into three parts, the present drawings only show the third part which is the outcome of the research. The whole, summarised on this board, has been submitted for examination in a catalogue format available on request.
The first part was the study of the impact of the de-industrialisation on the constructed environment, including the contemporary sociological changes and architectural responses to it. The second part describes a design instrument that should help to recognize the architectural characteristics of the existing. For this an exemplary site in Berlin has been used as laboratory. The third part explains the design (pursued on the same site) as a demonstration of industrial reclamation.

The design could be summarised by the translation of the industrial tension between forms and functions into the post-industrial tension between Gestalt and programme.
There is no rupture between the industrial and post-industrial – instead an open-ended mutation.
The strategy for the project is to use the individual to define a series of phases of interventions. The first phase will be the trigger for a reclaim. The aim is to self-generate the further urbanisation of the industrial zone. Accordingly the land will be decontaminated step by step. Subsequent phases will defined complementary inter- ventions, while becoming less define the further it gets.
Following this strategy and according to the local development, a full reclaim may be forecasted in 30 years. 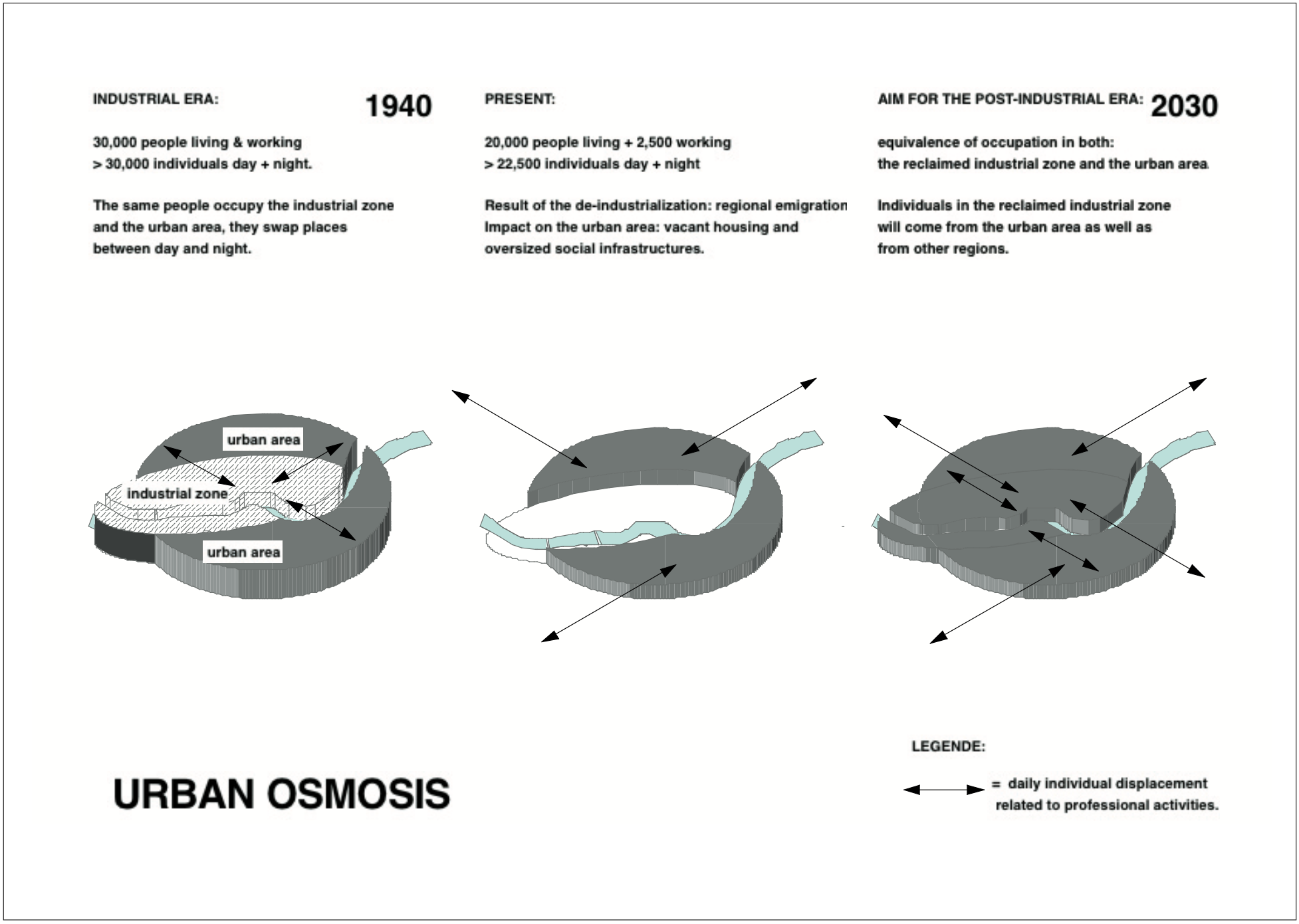 Schema of the strategy, from the industrial era to the site’s mutation after thirty years

One way to summarising the design as a whole is to take the site and explain it following the distinct levels where the project elements occur from the bottom to the top. Starting from the underground with the contaminated soil or Altlast, the ground floor with the new site entrance and the Industrial drive, the first floor with the concourse including the shed type Units, the upper floors which are the levels from the multi storeys above the first floor, and finally the penthouses (see scheme with illustration below).

The ground floor is also divided into three parts: the Walks, the Industrial Drive, the vehicle area.There are two walks; the first is the River Walk situated on the soil to be decontaminate between the river and the Industrial drive. The second is the Mercantile Walk, which is the existing street running between the industrial zone and the housing area. The transit traffic will be diverted to the Industrial drive and only the local traffic and trams will share the Mercantile Walk with the pedestrians and shoppers of the existing stores.

The Industrial Drive is the necessary new infrastructural element in the redevelopment of the site allowing individuals (with their cars) to access the site. The traffic flow coming from the east will be diverted before the local area and led on to the site with a new bridge, after being driven through the site it will reach the existing bridge. From here the traffic flow will be led back on the other side of the river and will end on the radial of the city centre and international airport after

having been driven through a new housing complex. Through the site, the Industrial Drive will serve the buildings directly adjacent and in subsequent phases the secondary roads deserving the buildings situated further back toward the urban area. The vehicle area is the surface in-between the two walks including inside (most of) the buildings, which is reserved for individual vehicles to park or join the Industrial drive.

The first floor is a partly new level linking all buildings together called concourse. It is an active interface between the vehicle area and the upper floors composed besides the existing first floors of the multi storeys, of the hanging gardens and the shed type Units.

Served by the vehicle area and the concourse, the upper floors contain further Units spread over at low density. A partial reuse of the, but distributed over the whole site, will allow the new settler, the start-ups, to expand according to their needs.

A high density, or the complete reuse of the multi storeys together with the reuse of the shed would not allow any complementary construction such as the Penthouses without creating an over density and will not allowing the expansion of the start-ups without their relocation.

The penthouses are a real-estate coup. Their aim is to promote the site and its differences. This is a free interpretation of two rules in Berlin, the first is about the restriction of housing within industrial areas, the second is about a building hight limitation
to 22 meters extensively used in the past ten years. The argument is that the vertical definition of zone is valid within this hight only and therefore housing could be built if above 22 meters. The programme of the penthouses is: semi-luxurious apartments with views, placed on the top of existing buildings.

DESIGN OF MICRO-SPACES FOR SOLE TRADERS 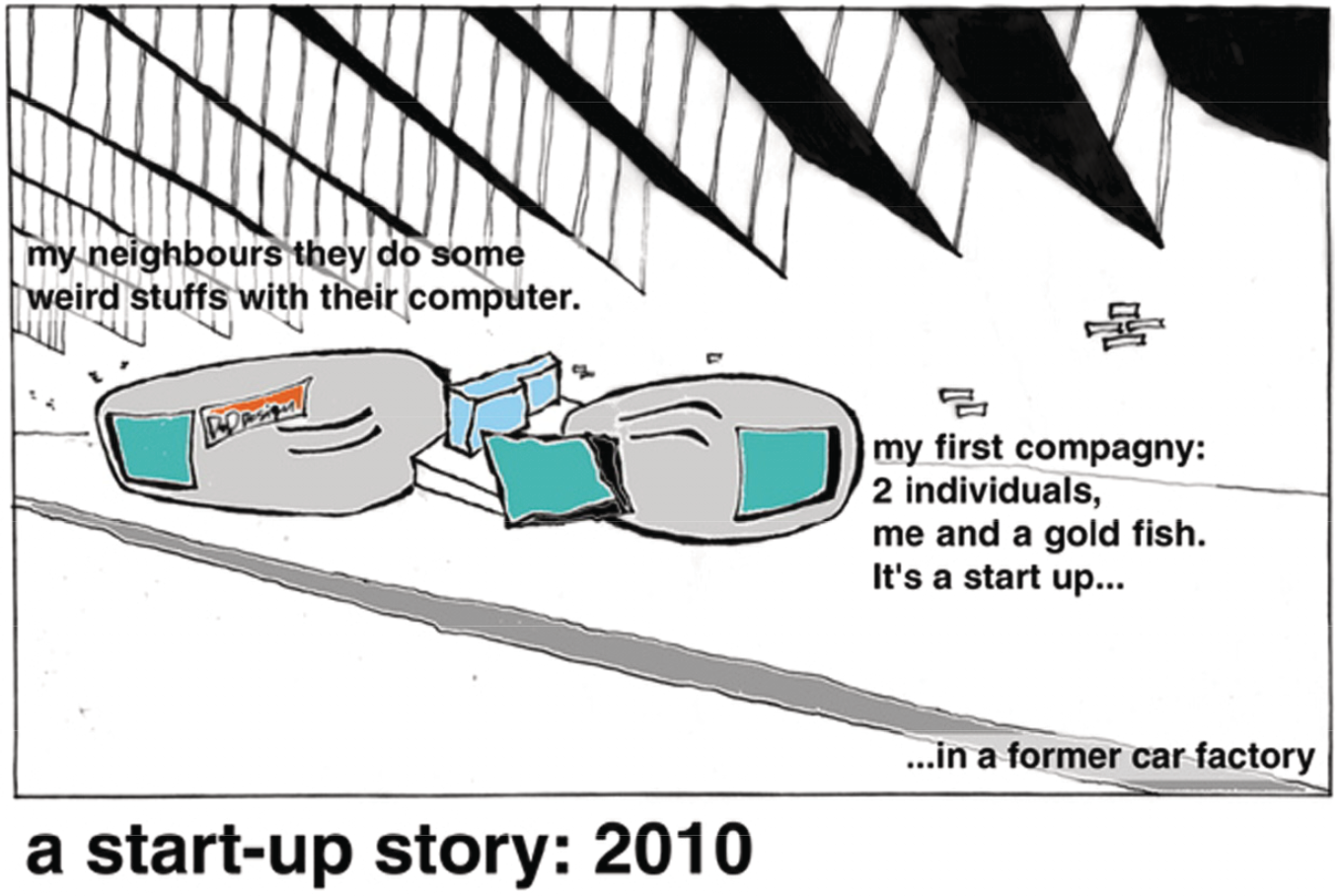 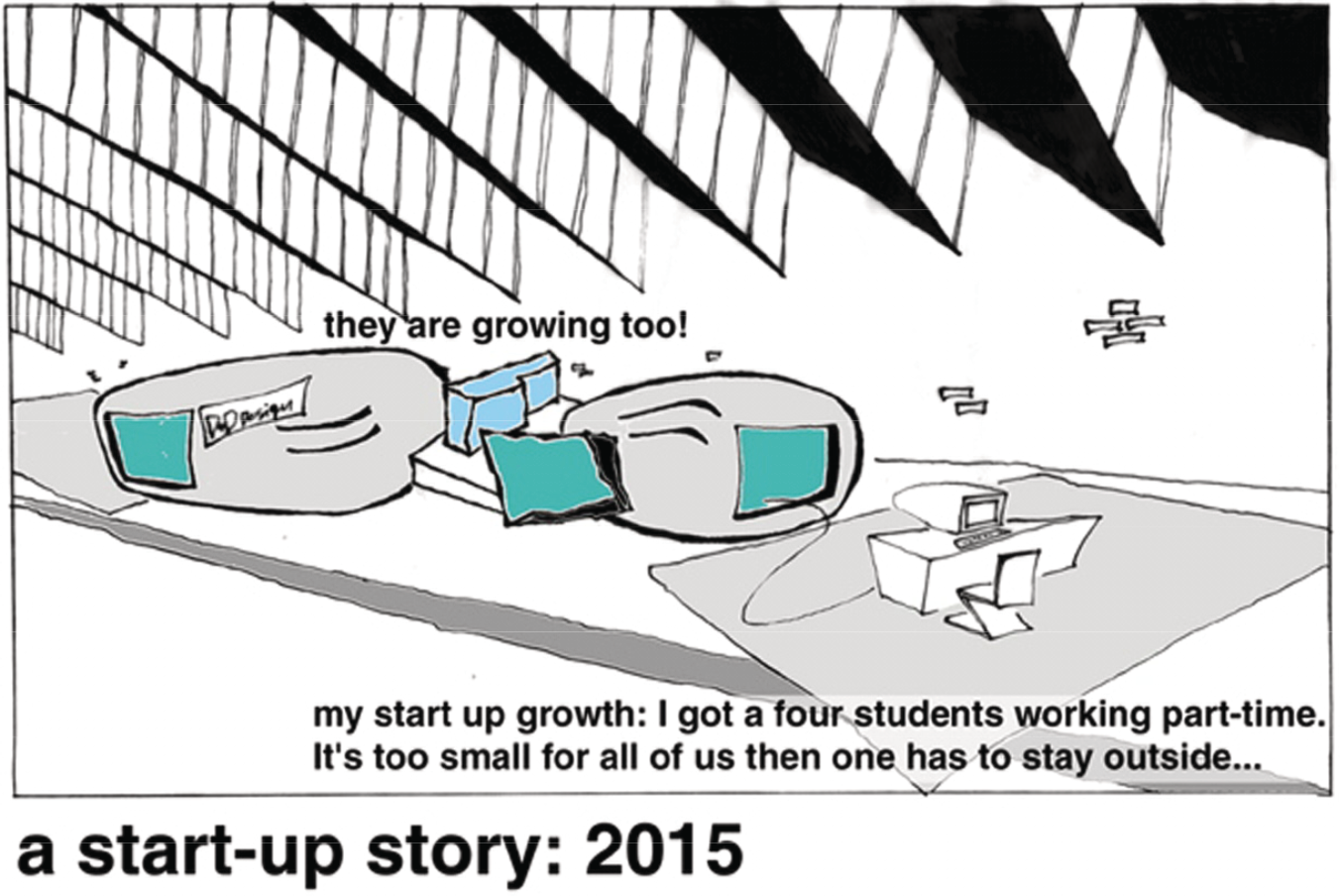 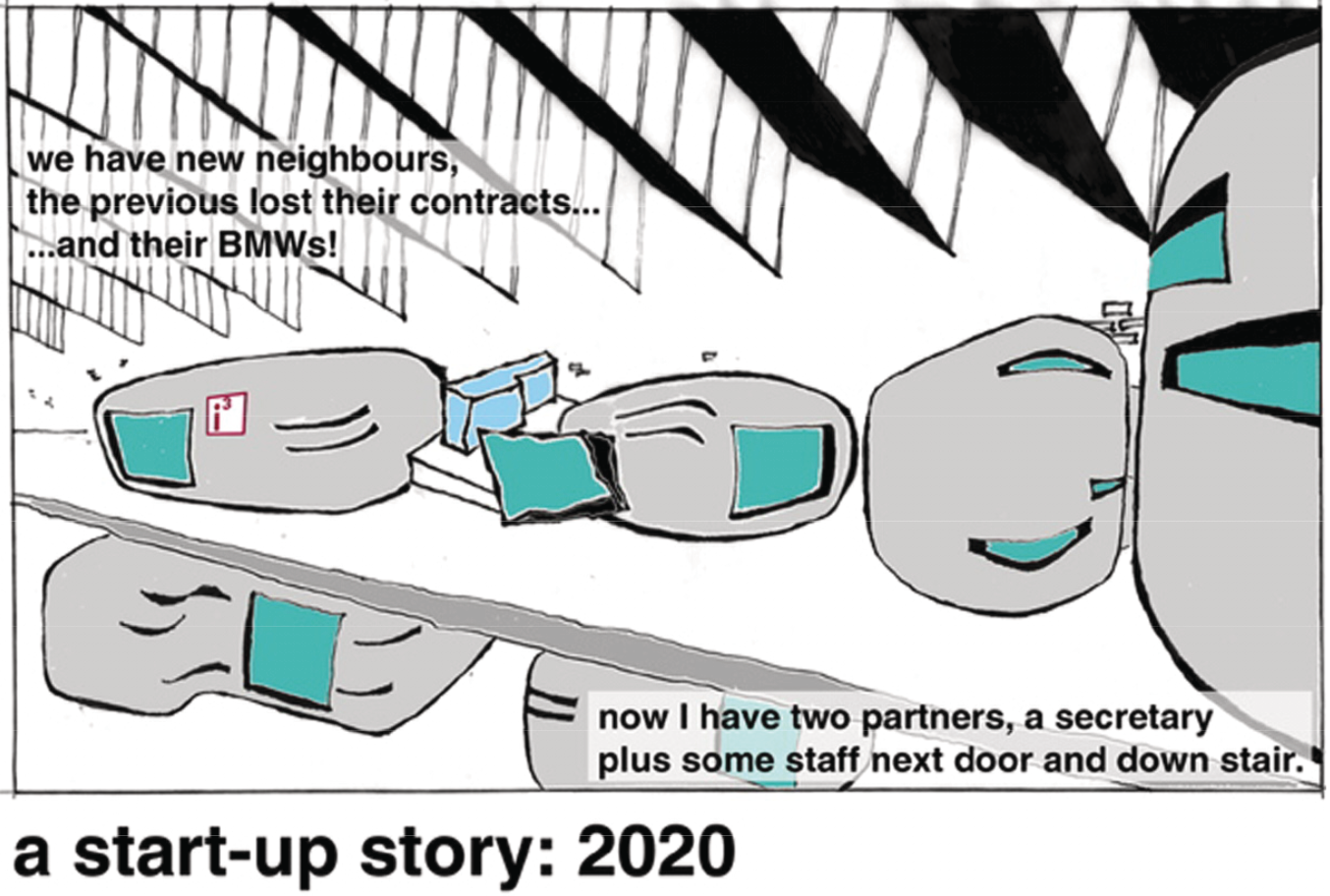 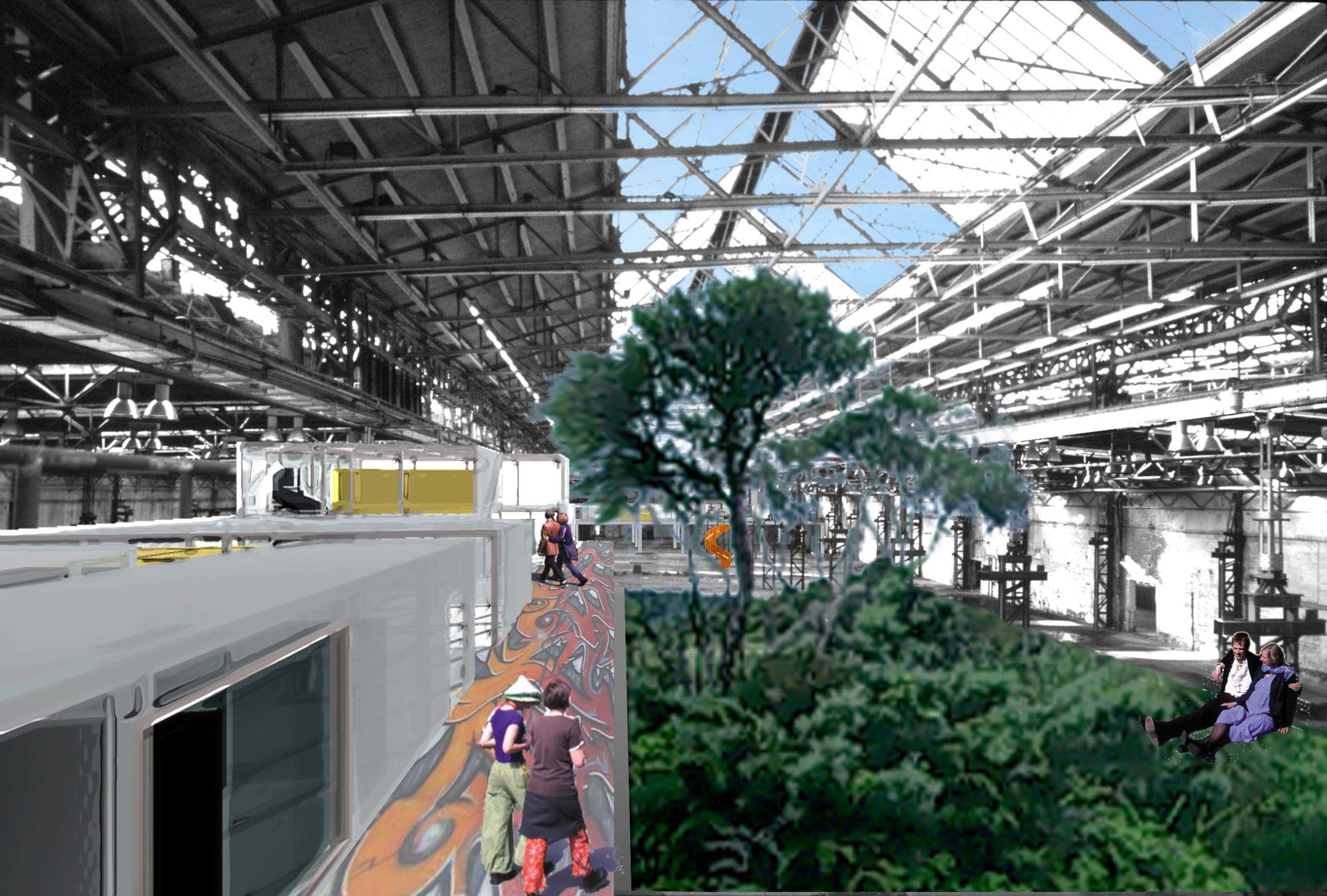 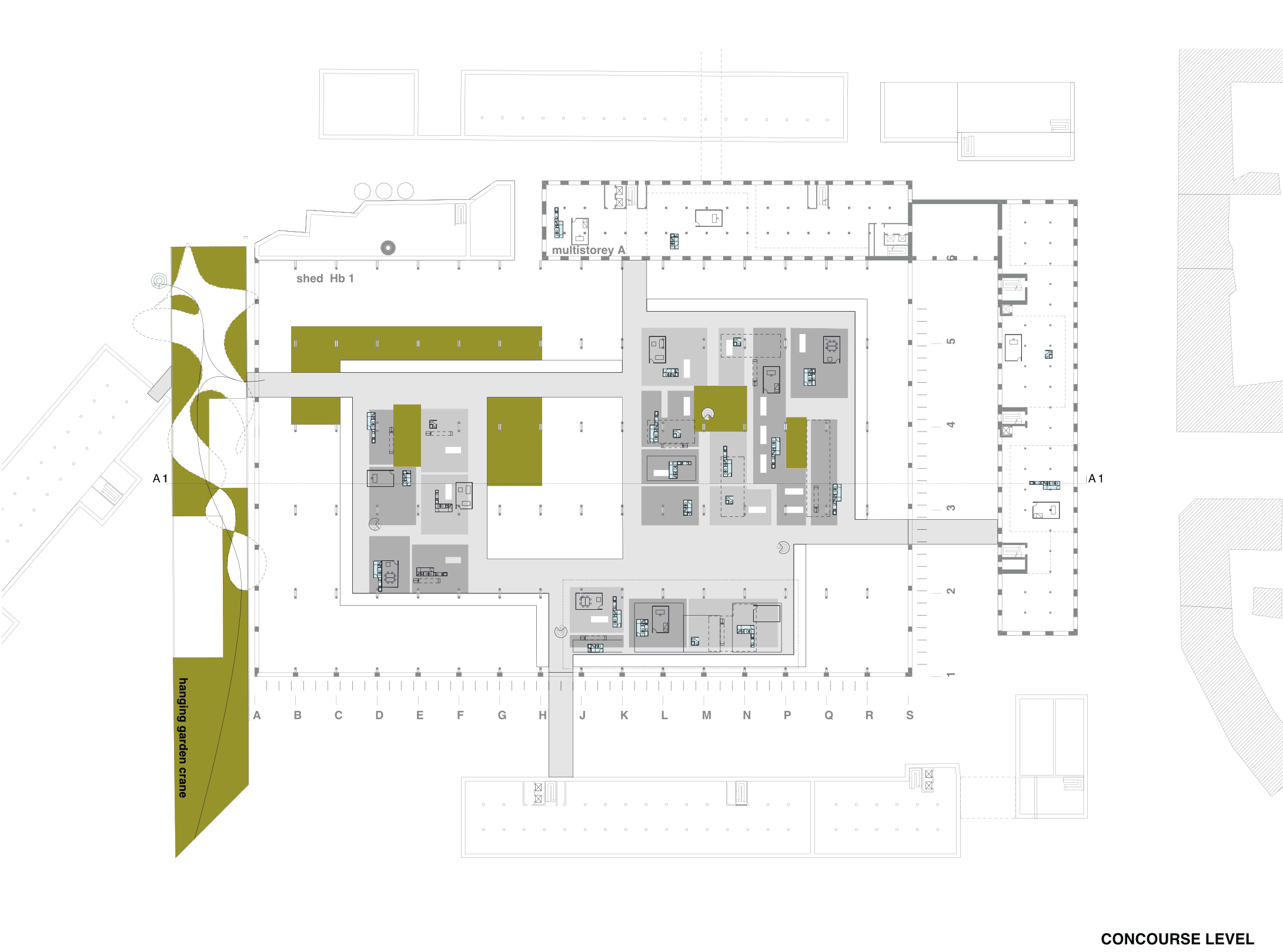 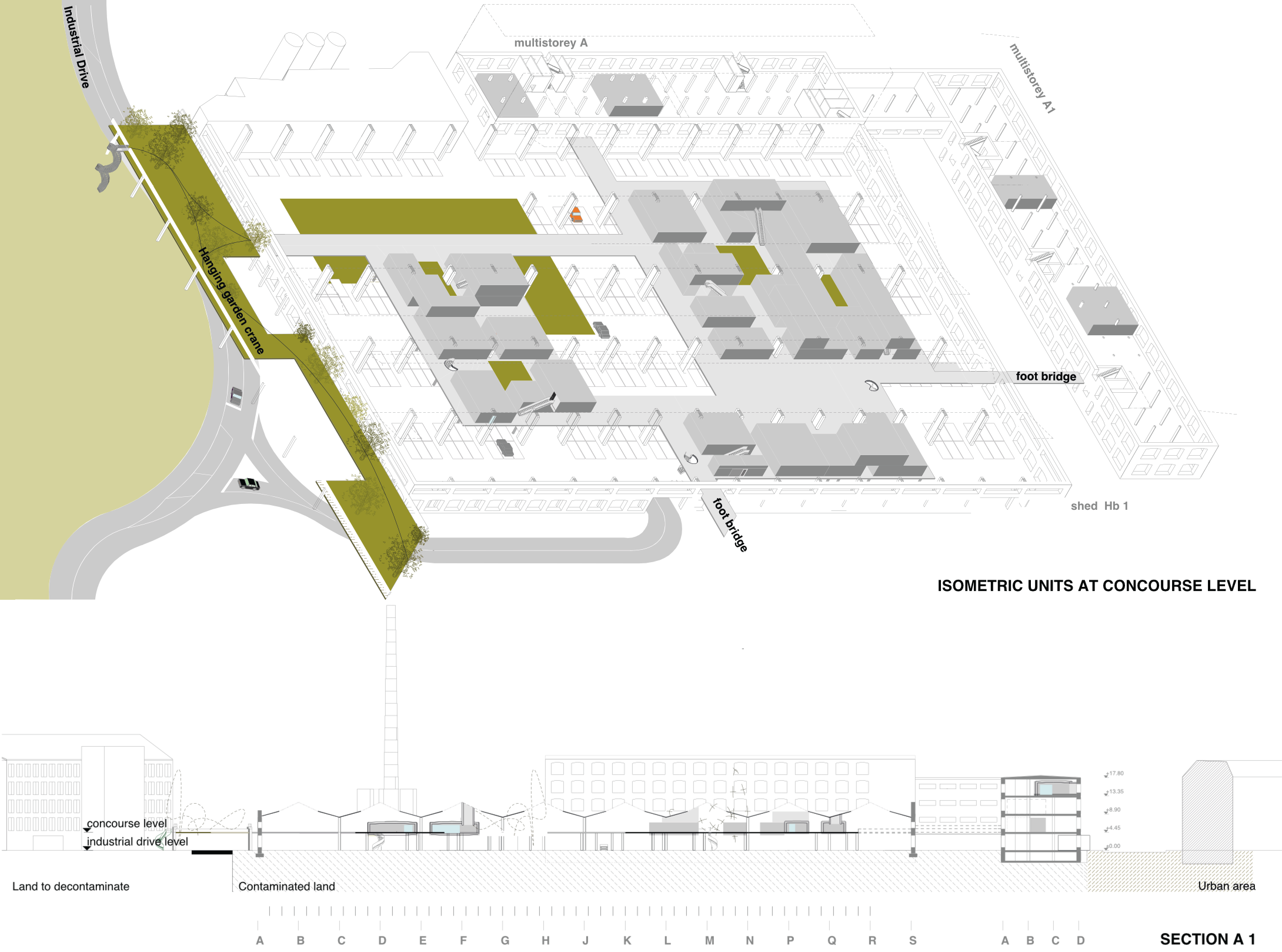 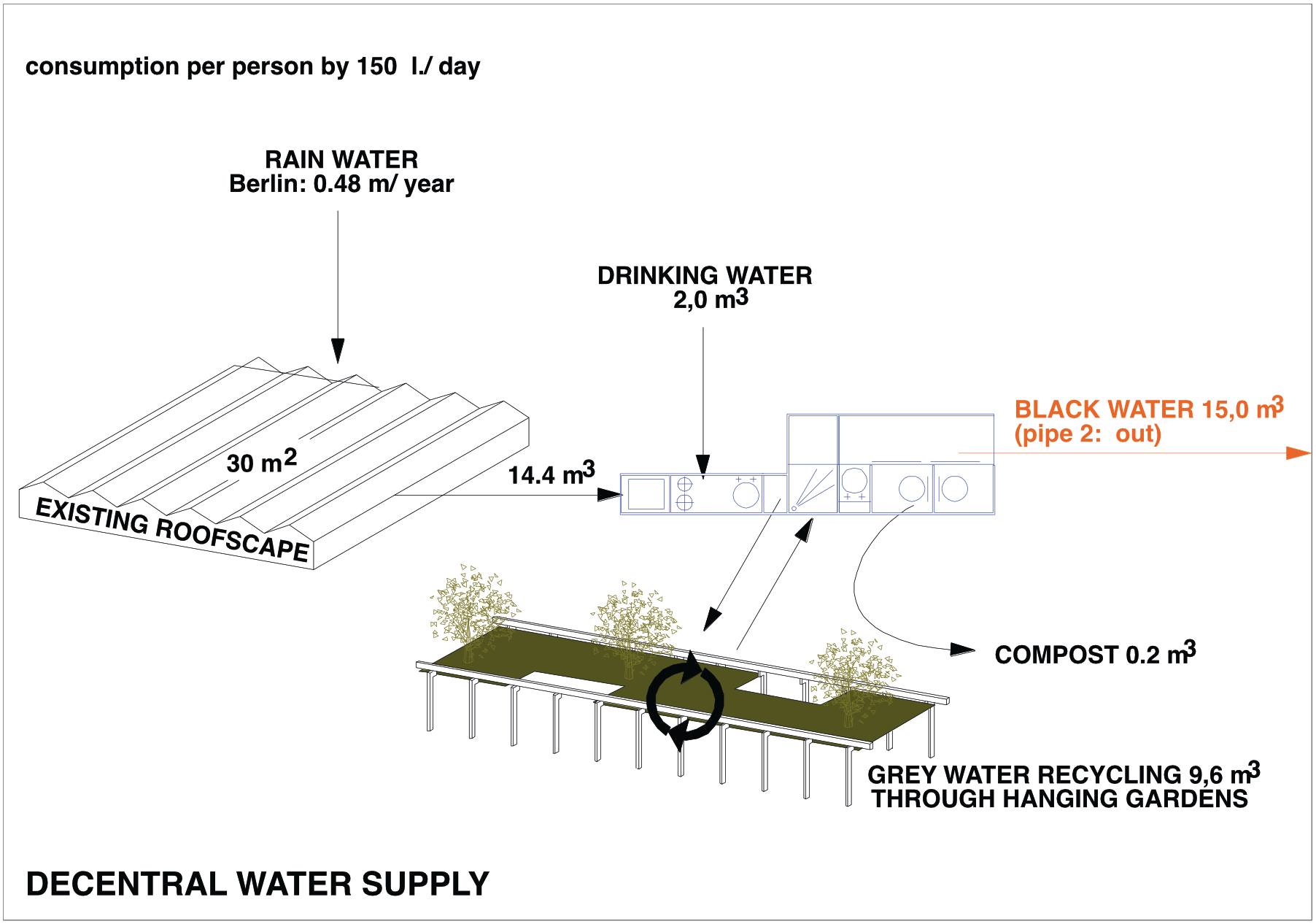 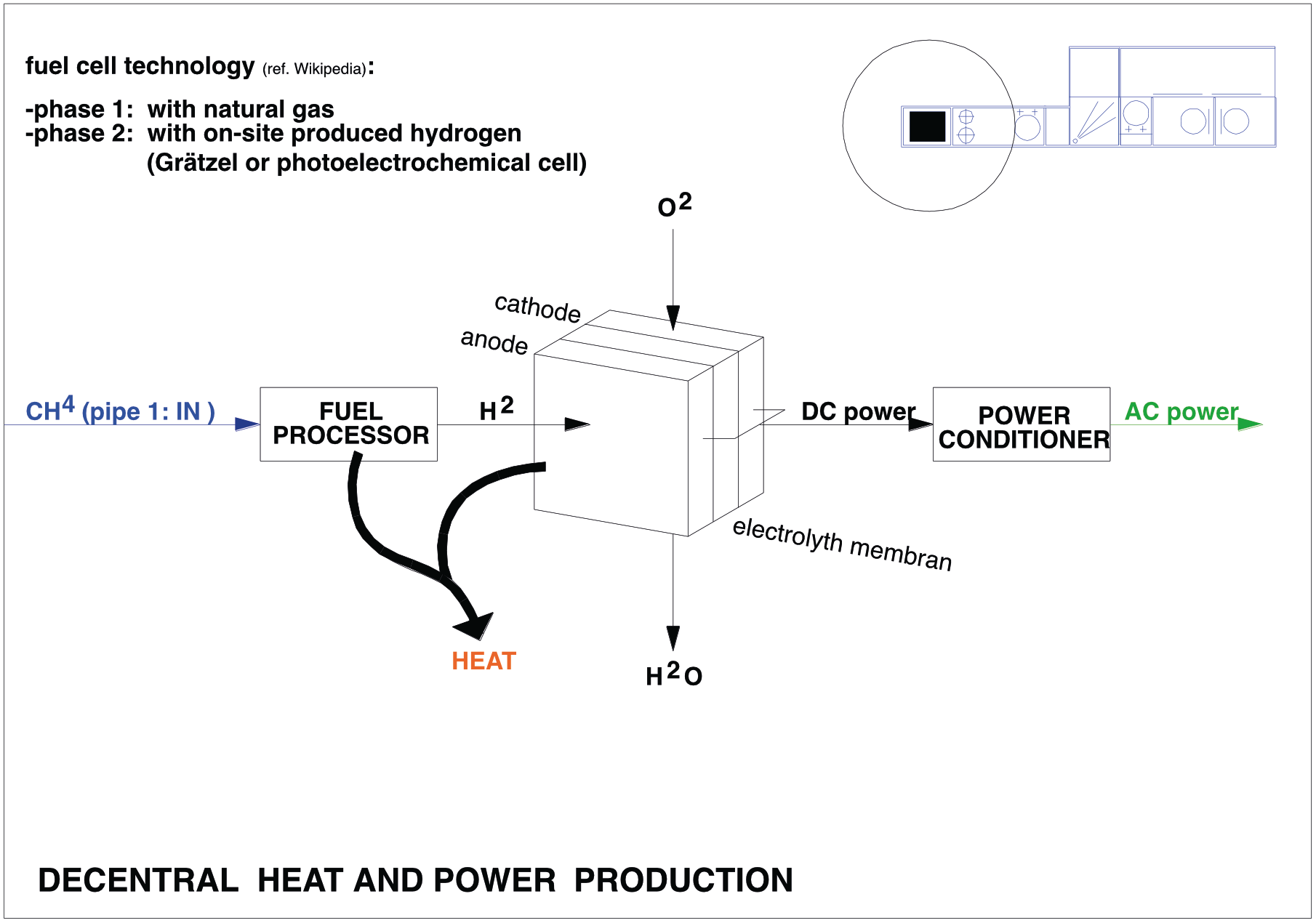 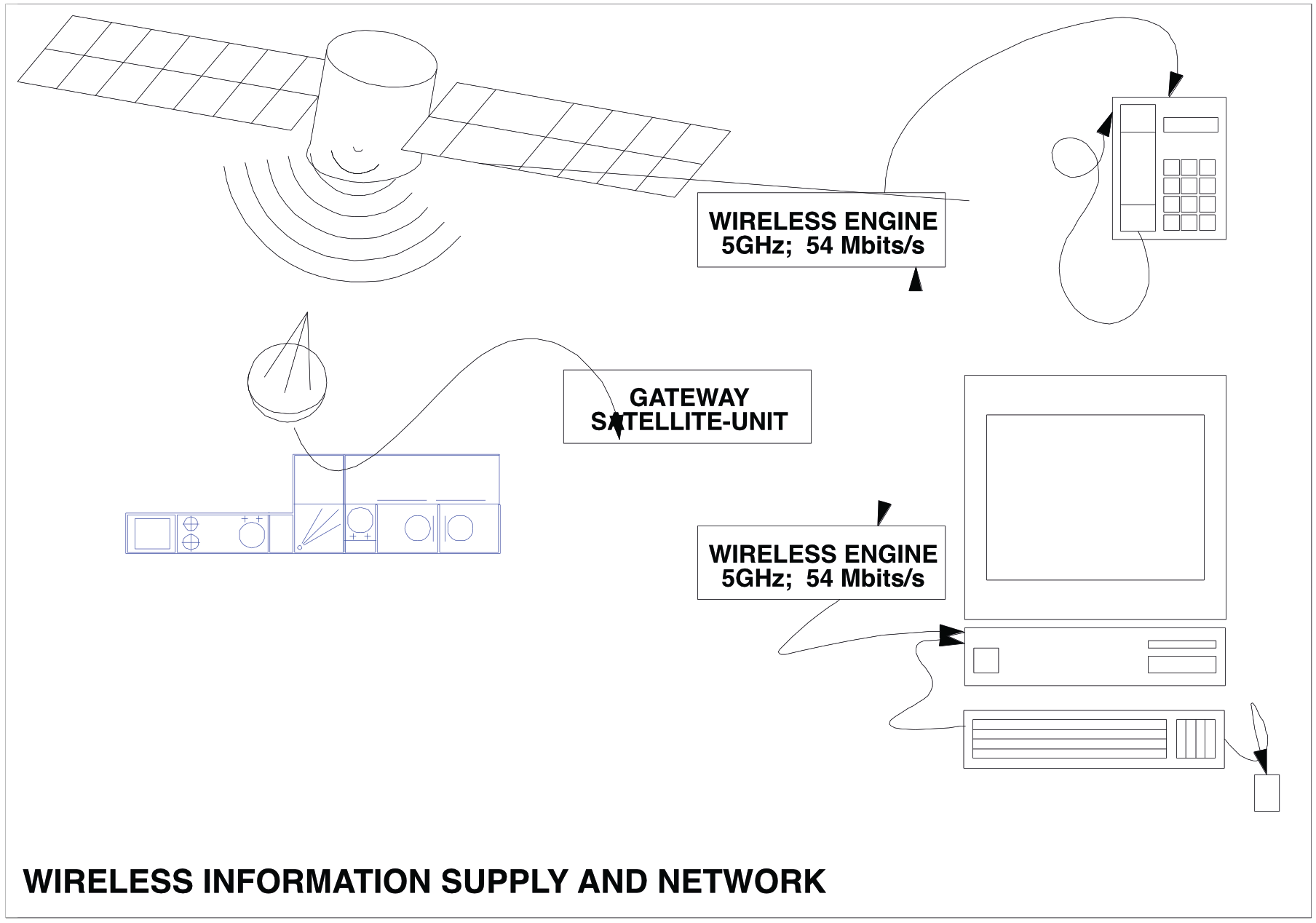 SCHEME & ILLUSTRATIONS OF THE PROJECT 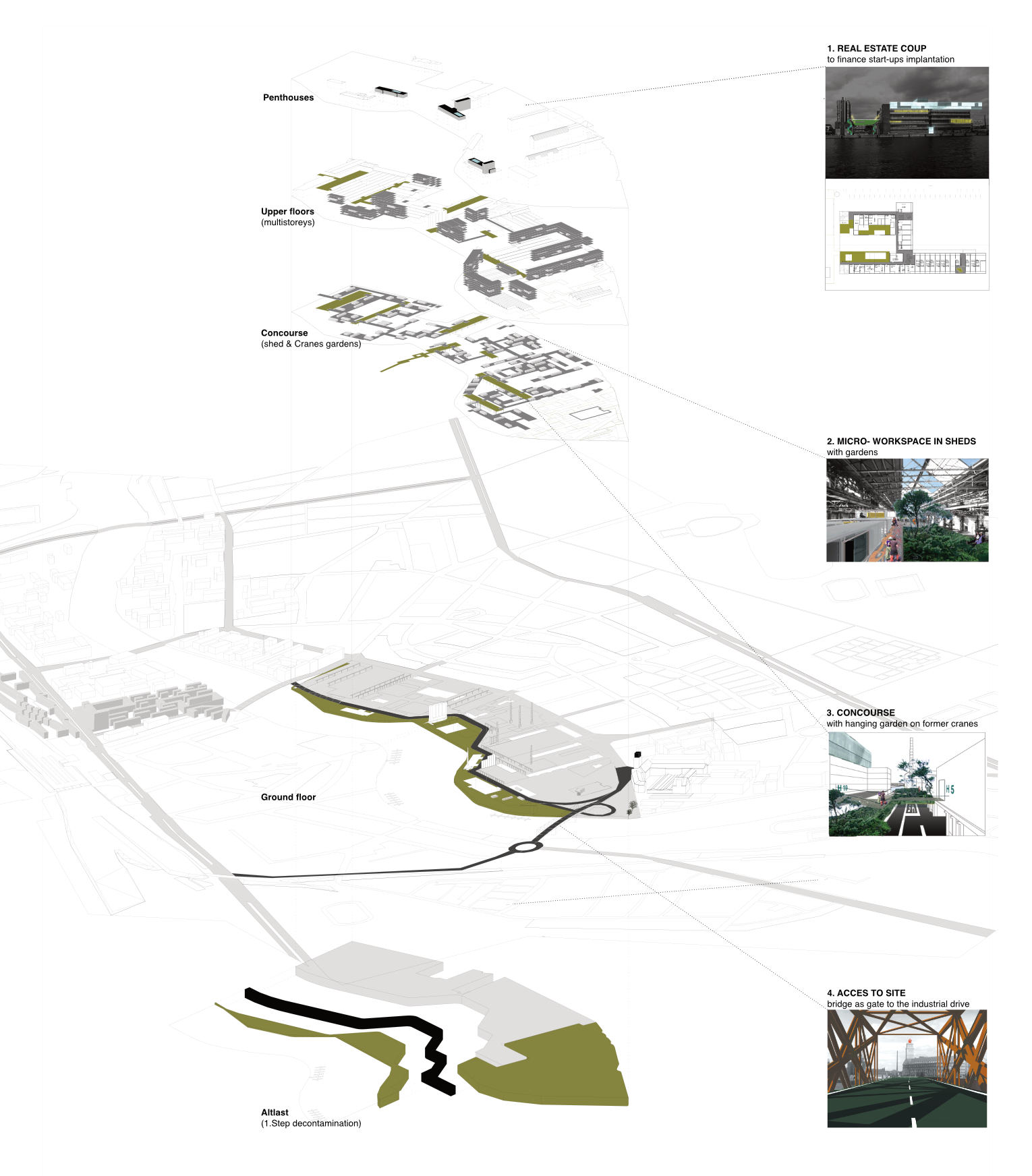